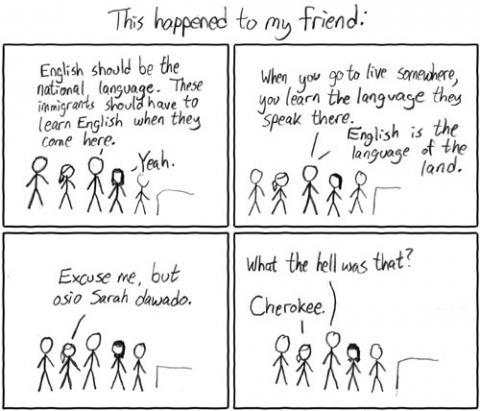 Okay, now let's consider for a moment what America is.  Is America a "white" county? Although many would like it to be, it is not.  Non-hispanic whites were only 68% of the population in 2008 and that number is likely inflated since the percentage is dropping rapidly.  Is it an "English" country?  Officially yes, although a huge number of Americans speak other native languages.  16% of the population is of Hispanic or S. American origin and most of them speak Spanish or Portugese at least as a 2nd language.  So what is it?  An "American" country?

At what point does one become an American and then have the right to delineate the "other" and then humiliate them?

Has any US and EU citizens reading this ever tried to get a visa for another country?  I've gotten several and it is usually as simple as "send in the form with $50 and your passport and get a visa in a week or so".

My in-laws are trying to get a visa to come to the US and visit their daughter, son-in-law and granddaughter.  My father in-law was an important figure in the police service for many years and they are 100% above board legally and financially secure.  Here's the process:

We've just about got to #4 after giving the state department about $600 in fees.  So the only way to get an appointment now that they've outsourced the process is to go to the VFS website.  At the VFS website, you fill out a form, and a captcha and then...

There are NO appointments available.  No indication of when they will become available other than that we should "try later".  3 weeks of trying 10 times a day.  Waking up at 4:30AM to hope we catch the next batch of released appointments.

This is stupid, wasteful, arrogant and hateful behavior.  Especially for the amount of money they require (oh and they just raised it).  It is simply holding powerless brown people hostage to their desire to visit their loved ones.  There is no excuse for such an inefficient system.  Several attempts to contact people at the embassy and get a resolution has failed.  Apparently they think this makes sense and that their customers should be treated this way.

Well I don't think it makes any sense.  Sure there is large demand, but a system which takes your money and then makes you click on a web page hundreds of times instead of just giving you the next available time is absurd and those responsible for setting it up should be sacked.

I've had the same problem with the stupid visa process setup by US consulate and VFS. I need to visit US next week urgently, but no appointment available until 45 days.

How on earth do we make our travel plans 2 months prior to the travel date? These guys need to be a bit realistic at least.

This visa process is extortionate. Moreover, there is no way to contact US embassy.

Structural untoward utilise for me, Unoriginality ruttish that you are one of the uncomparable bloggers I e'er saw.Thanks for act this newsy intellection

Get immediate access to review how to make money with Talk Fusion video communication instantly with the No. 1 Home-based Business opportunity from home. I am a Home-based Business Solution Specialist. Contact me to help you find the right business and to jump start your income. There is no obligation to join and the tour is completely FREE! Take the tour: http://StevenGans.instantprofitsnow.com/tour/