I have a problem.

I love music. Any kind of music. My Spotify playlist will move from Azerbijani folk to country blues to NYC jazzy Hip-hop to bhangra fusion, European experimental EDM and then to early 90s West Coast gangsta rap.

That's not the problem.

I have a daughter. She's 3 years old and really cute. But don't take my word for it:

She's not the problem either. She's awesome, and shares a diverse taste in music. Well, maybe not quite so diverse. While she might like to hear Big Pun talk about "I could go downstairs, little brown hairs everywhere." I'd rather not explain that lyric. 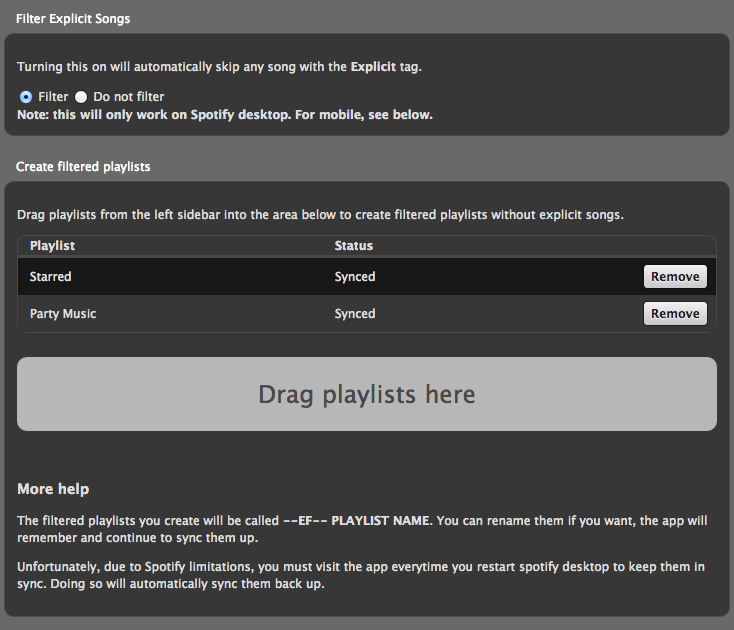 This Spotify app allows you to skip explicit songs by turning on a filter when using the desktop app.

For mobile, it's a little more complex. It creates copies of selected playlists without the songs marked explicit and will keep them in sync.

Okay, I'm feeling like an idiot because I'm not finding the app you're talking about. I've been looking for one way to do this, not only for when I'm around my kid, but also at work. Is this an app within Spotify? And is it called Bleep? I'm just not finding anything.

Sorry! it's not available in the spotify app store - they don't allow it... see the post here: http://jacobsingh.name/content/spotify-rejects-my-app-millions-toddlers-get-their-mouths-washed-out-soap-0

Github page is here if you want to get a developer key (it's easy) you can install it from that: https://github.com/jacobSingh/bleep

I would also like to make use of this app for when I'm playing music at work.

Please provide a link to the app or more information where we can find this feature.