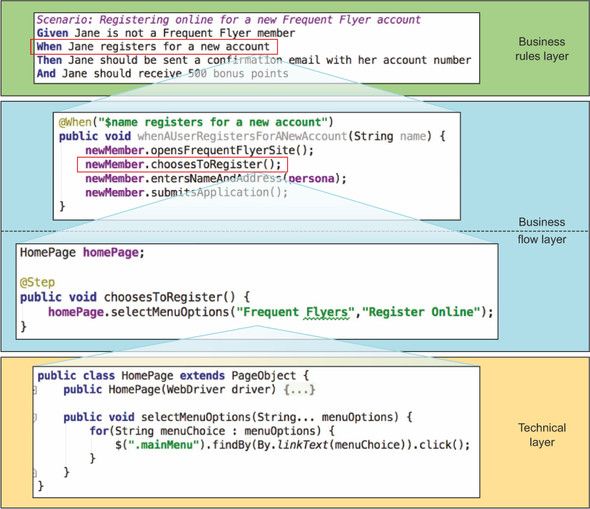 I’ve been researching Behavior Driven Development. This is not a blog post in that it is completely unedited, without links or pictures. Utter contempt for you, my reader. I’m just taking notes but might as well do so publicly.

Write in a declarative style.

When should focus on:

When should ideally not include:

Note: I find this hard to make happen in real-world scenarios, many UI tests do seem to be based on UI interactions, so not sure always how to make this real.

Then should not focus on:

Examples:
Then the user is shown a confirmation message
NOT
Then the users see a modal popup containing the phrase “Thank you, we received your request”

Taken from BDD in Action…

So the persona is defined somewhere in the architecture of the test files (note: this is a challenge in multi-language test implementations). Then Scenarios can be written using this Persona all over. I like this…. The attributes of this persona are then unbound from the tests, but have relevance in testing certain cases.

This can also be overwritten like:
Given Jane is 60 years old

A step def for this, would take the persona we already are using, and change its age to test a given scenario.

Okay, so this is really the same as personas, but applying to other things. So instead of:

We define Rice as a thing we prepopulate either with our CI or via a hook in our BDD runner. Then we can just refer to it whenever.

This is important because it adds reusability and robustness to the stack. This is very easily understandable when it is fronting a traditional Page Object Model and browser automation. the POM is level 3 (Techincal API). Level 2 is still usually missing though because traditional steps are still fairly imperative and think in terms of specific manipulations to make on the application, not functional steps that need to be implemented

When to use web/mobile automation vs. other test types

This is the big one I’m reading the book for. Great quote and example here:

Web tests do an excellent job of illustrating how a user interacts with the system via the user interface to achieve a particular business goal. But they don’t need to show every possible path through the system-just the more significant ones. More exhaustive testing can be left to faster-running unit tests.A good rule of thumb is to ask yourself whether you’re illustrating how the user interacts with the application or underlying business logic that’s independent of the user interface. For example, suppose you were testing a user authentication feature. The acceptance criteria might include the following:
The user should receive feedback indicating the strength of the password entered.

The second criterion, on the other hand, is about determining what makes a strong password, and what passwords users should be allowed to enter. While this could be done through the user interface by repeatedly submitting different passwords, this would be wasteful. What you’re really checking here is the password-strength algorithm, so an application-code-level test would be more appropriate.
‘’’

What is worth writing scenarios for.

Another big one. It’s important to not say “all new features must have BDD spec files”… Because the reality is that not everything is worth testing to spending time in the 3-amigos conversations about.

I thought this was a no-no given Agile focus on users, but actually, this is a rule worth breaking. As long as the business can understand the Gherkin, anything is fine. Consider this example from BDD in Action:

This doesn’t say “A User wants… etc”… And I think it’s still readable, useful and implementable.

More later as I finish the book up….

Originally published at http://www.jacobsingh.name on November 3, 2017.