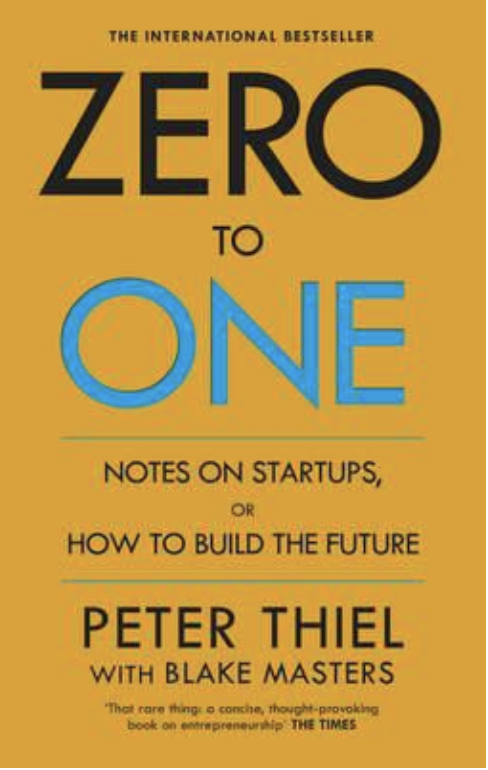 ** Author’s note: I often write up short reactions to books which are interesting. These are not always super well structured, but if it helps you get the gist or gets you interested in reading it, yay!

This book had an outsized influence on me. I can’t believe it took me so long to read it. To be honest, I mostly avoided it due to Peter Thiel’s ultra-conservative and at times bizzare political beliefs. That is, of course, a stupid reason to not absorb new ideas.

The biggest takeaway from me is that Capitalism is a game of monopolies and unfair advantage. Seems obvious enough, but his point is that in economic terms, if you aren’t creating one, you are about to be disrupted by one and competition trends towards no profits or innovation for anyone. This is counter to the prevailing — and often accurate belief — that competition spurs innovation.

To build an unfair advantage, the advantage you create should create more of that advantage. For instance: Amazon sold products at very low margins for years, reinvesting revenue into efficiencies which made their costs lower, which allowed them to sell at lower margins and eventually become impossible to displace because no one can operate at such low costs with their breadth of offerings. Anyone who tries to be cheaper in any particular category gets promptly run out of business on below-cost selling.

Through the creation of excess which monopolies provide, companies are able to innovate — so Thiel is a fan of monopolies, provided they are arrived at by business / technical acumen and not dirty government deals and such… I’m not sure I 100% agree about the benefits to society, but I do agree that competition is a road to irrelevance.

In Thiel’s world — life is a power law, not a bell curve. The spoils go only to the victors.

Now, when thinking about a business, I ask myself the question: What strategy could get make us 10x the next competitor in a given market? Key aspects here are 10x and given market. It’s better to have a monopoly in a small market and expand, than to be a bit player in a huge one.

Here are some other random notes and thoughts:

On Power law within organizations


This is the pitch that should click with all good candidates and should be the main reason people stay in a job. In India, it is a challenge as positions are still looked at very transactionally and there have been very few exits which have done right by their people. Still, the promise of role expansion and career growth tied to the exceptional nature of a company should drive the right people.

On Lean startups, agile and the MVP culture

“Lean” techniques such as Agile methodologies, MVPs, frequent and rapid experimentation are not a goal, they are a tactic. Strategy has to start with the end game of establishing an unfair advantage, it cannot evolve out of experimentation and incremental work. Still, in companies which achieve escape velocity from competition, growth is so rapid and unpredictable that it is the superior tactic to the delusions of target setting and long term central planning exercises. Those practices are important in competitive business to achieve a little margin here, and a little growth there, they only are effective in known product-market environments. In such environments, there is little upside because everyone knows the rules of the game and is playing it the same way.

Competition is the path to the heat death of the universe

Americans mythologize competition and credit it with savings us from socialist bread lines. Actually, capitalism and competition are opposites. Capitalism is premised on the accumulation of capital, but under perfect competition all profits get competed away.


Ironic given Thiel’s political views, but he takes a page straight from Marx here. However, unlike Marx who laments the death of individual liberty and access to livelihood and agency, Thiel celebrates the innovation that arises from the excess monopoly creates. Whatever your stance on the ethics or priority of it, his point is valid: In perfect competition, there is no differentiation, and eventually, no improvement. The greater the competition, the more focus there is on razor thin margin improvement, trending towards total equilibrium and a death of innovation or growth.

Long run equilibrium… a state in which all energy is evenly distributed and everything comes to rest — also known as the heat death of the universe.


Make your product so good, people can’t help talking about it

If your product requires advertising or sales people, it’s not good enough… the only sustainable growth is viral growth


I would posit that this maxim is not universally true in B2B, particularly enterprise software where distribution is exceptionally important. However, in the B2C context it is akin to a law of physics. The value of an idea is baked into the price of the stock. If you need to continually spend money to achieve growth, others can and will do the same, making the value of the spend less and less over time.

Originally published at http://www.jacobsingh.name on December 7, 2018.